This is how Legalized Marijuana can interrupt your lease

At a conference in Dallas, Texas, in 2014, Colorado Governor John Hickenlooper told other US Governors to “Think twice” before legalizing Recreational Marijuana in their states.

Of course, for decades every state in the US has had plenty of illegal Weed floating around, but that’s a different story than making a statewide decision to legalize Recreational Marijuana (“RMJ”).

In Colorado and most states, we distinguish between RMJ and Medical Marijuana or “MMJ”. I guess there’s a third category, too, which I will call “IMJ” or Illegal Marijuana. Some refer to it as “street” or “Black Market” Marijuana.

The Denver Business Journal published an article on May 9, 2014, titled “Colorado slips in ranking of best states for business,” which noted some early but telling news about legalizing RMJ…

“The opinion of CEOs about doing business in Colorado has fallen over the past year, according to a survey released by Chief Executive Magazine.

Colorado’s position on the list fell three spots from last year, to No. 16, and the legalization of Marijuana may have had something to do with the state’s latest ranking. As the magazine noted: ‘Business-friendliness gets shaky as state deals with legal-Marijuana fallout.’

One CEO said about Colorado: ‘With Colorado’s new drug laws, I would definitely hesitate to locate a new business there.’” 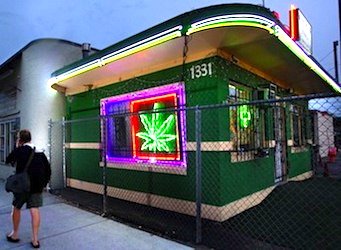 Of course, that occurred in 2014 before other states also legalized RMJ, which is a big jump from legalizing MMJ. In Colorado commercial real estate circles, we discuss short-term issues, such as how MMJ and RMJ businesses are driving up lease rates and selling prices on certain product types, particularly Warehouses for MJ Grow Facilities and Class B and C Retail spaces for MJ Dispensaries.

Out of political correctness, we just aren’t talking about the bigger picture. I surmise that it’s because we are much too fearful of ticking off our neighbors and business colleagues in Colorado who voted to legalize Recreational Marijuana. Some are now having second thoughts about legalizing Recreational Marijuana.

Personally, I am OK with MMJ for legitimate, compassionate medical uses and I voted for it in 2000. However, that is not what we ever had in Colorado, certainly not once “The Green Rush” started in 2009.

No, we had “Checkbox h” or “Checkbox 8” that allowed doctors to write MMJ Permits (not prescriptions) for “Severe Pain”. Over 90% of all MMJ Permits were written for this reason. Take a look for yourself here at the Physician Certification that is required by the State of Colorado’s Medical Marijuana Registry.

Shouldn’t we be talking about the equation Legalized Marijuana + Business + Jobs = What much more openly, without the giggling and wink-winking, especially among Corporate and Commercial Real Estate Professionals?

What’s happening in your state about legalizing Marijuana? Get ready because what happened in Colorado may be coming to your downtown, neighborhood strip centers and industrial parks.

Are Corporate and Commercial Real Estate Professionals in your city openly discussing MMJ or RMJ yet?

Or is there a wary political correctness about bringing up the subject?

I’ll note, too, that our residential loft in the Ballpark Neighborhood near Coors Field in Downtown Denver was located next door to one of Colorado’s first MMJ

Dispensaries, which included an MMJ Grow Facility, since the building had the proper Industrial Zoning. From that personal experience, I learned a bit about this subject.

Our company, MacLaurin Williams, has gone so far as to develop a unique Lease Exhibit to protect our Office and Industrial clients to prevent their Landlords from leasing vacant space in their multi-tenant buildings to MMJ and RMJ-related businesses, as well as to court-ordered drug and alcohol testing centers. Ask me if you’d like to have a copy.

So what are the issues that our Clients have actually faced with MMJ, RMJ and court-ordered drug and alcohol testing centers?

Not every Colorado business, professional firm, non-profit organization or government agency takes an official position on their employees’ use of MMJ or RMJ. However, very few of them seem to want MMJ or RMJ businesses or court-ordered drug and alcohol testing centers as neighbors in their Office, Industrial or Retail buildings.

Contact MacLaurin Wiliams and William Gary, MBA, MIM, at cell +1 303-901-1108 or wgary@MacLW.com to confidentially discuss your leasing needs and any questions you might have about Marijuana Tenants as neighbors in your building. We have helped a number of Clients in dealing with these real life issues.